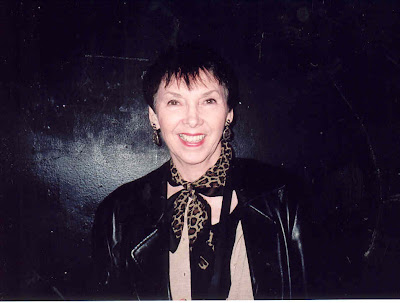 On Sunday January 28, Charlotte Lesher, mother of Joey Ramone suffered a heart attack in her home in Rego Park, Queens home , and passed away. "Mama Ramone", as Joey called her, was 80 years old, but her youthful sparkle and lust for life kept her looking and feeling half her age. Charlotte is survived by her younger son Mickey Leigh, a first class guitarist on the New York scene.

An artist and bohemian with a diamond wit, razor intellect and a heart bigger than the ocean, Charlotte was instrumental in nurturing the talents of the early Ramones. During the 1970's, she owned a gallery called the Art Garden in Forest Hills. Joey and Dee Dee practiced in the basement, grew pot plants and sometimes they slept there, barricaded behind cartons to avoid detection. After Joey died in 2001, Charlotte and Mickey honored his memory by hosting an annual birthday bash that would become an in-gathering of the Post-Ramones Empire, featuring some of old school and neo-punk's greatest bands.

Charlotte Lesher was instrumental in getting a street sign erected at Joey Ramone Place on East 2 and Bowery, near the former site of CBGB's. She had been a passionate and vocal supporter in our campaign to save CBGB's from closing last year. Charlotte was a scene matriarch, as beloved by us as the Blessed Mother herself. Over the years she gathered two generations of brokenhearted Ramones fans who sent her letters, cards, gifts and flowers. Charlotte rarely missed a gig, no matter what time the band went on--if her sons were playing, she was right there, turbo-charged, alive and kicking.

Fierce like a lioness in her devotion to her sons, protective of anyone she loved, Charlotte was one of the strongest women I've ever known. A petite, powerful and charismatic presence. Married three times, in the pre-feminist era when women were expected to be coy, submissive and cooperative, Charlotte kicked down the doors and shouted out her own version of "Hey ho, let's go!" Though she survived the violent death of her beloved husband Hank, a bout with cancer, and the loss of her firstborn son, Charlotte never crumbled.

I will always remember my sweet, beautiful friend this way; it was summertime, were standing outside watching the sunset on a deck near Woodstock, where she had her summer home. The Great Mother Ramone looked out at the pink cloud formations, her pixie eyes twinkling, exhuberant, bursting with chi she declared, "Donna, I love life!" This great spirit is as undefeated in death as she was in life.