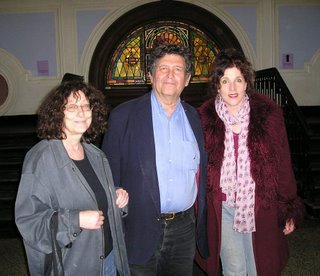 On November 9, Ellen Willis died following a sudden relapse of lung cancer. I remember the first time I saw her byline--the policeman's daughter from Queens didn't hide her sex as "E.Willis" or stick to "women's issues." There she was, Ellen Willis, feminist, rocker, smart, cool and determined. In New Journalism, writers like Ellen Willis, Tom Wolfe and gonzo Hunter Thompson dove right in, they read the social world like a Zap comic, like the Ramones. Willis wrote about the family, Lou Reed, Janis Joplin, Israel, Elvis, about everything. The first feminist critic, she was an avowed New Journalist who fought for the rights of the first-person narrative. After leaving the Village Voice, she became a professor in the journalism department of New York University and the head of its Center for Cultural Reporting and Criticism.


I remember the first time I met her: Willis opened the door to the Park Slope Apartment she shared with her longtime partner, distinguished sociologist Stanley Aronowitz, their daughter Nona and Icy the cat. She appeared like a vision, a pre-Raphaelite goddess. Her long blond curls framed a serene, translucent, delicate face. Reading her work, I had always imagined her as someone small, intense, dark and nervous, chain-smoking. But she was sensual, electric, and very funny.

After beating the sociologese out of me, Ellen assigned me to write about Long Island's suburban subculture and later sent me on assignment to Bergenfield. Both of my books, and everything I know about writing were born out of this editorial relationship. Even today, I can hear her screaming over my shoulder, "You're over explaining!! Just say it!!!".

A brilliant political essayist, journalist, and music critic, in the late 1960s and 1970s, Willis was the first popular music critic for the New Yorker, and also wrote for the Nation, Rolling Stone, Slate, Salon, and Dissent where she was also on the editorial board. She was the author of several books of collected essays. Willis attended Barnard College and The University of California, Berkeley.

According to her biographers, Ellen was a founding member of the radical feminist Redstockings. She broke the gender barrier as a music writer. Then, starting in 1979, Willis wrote a number of essays that were highly critical of anti-pornography feminism, criticizing it for what she saw as its sexual puritanism and moral authoritarianism, as well as its threat to free speech. These essays were among the earliest expressions of feminist opposition to the anti-pornography movement. Her 1981 essay, "Lust Horizons: Is the Women's Movement Pro-Sex?" is the origin of the term, "pro-sex feminism". She was also a strong supporter of women's abortion rights, and in the early 1980s was a founding member of the pro-choice street theater/protest group No More Nice Girls. When and where she entered, the doors ripped off the hinges and we followed madly.

A self-described anti-authoritarian democratic socialist, she was very critical of what she viewed as social conservatism and authoritarianism on both the political right and left. In cultural politics, she was equally opposed to the idea that cultural issues are politically unimportant, as well as to strong forms of identity politics and their manifestation as political correctness. Coming from a Jewish background, she wrote a number of essays on anti-Semitism, and was particularly critical of left anti-Semitism.

Willis saw political authoritarianism and sexual repression as closely linked, an idea first advanced by psychologist Wilhelm Reich; much of Willis' writing advances a Reichian or radical Freudian analysis of such phenomena. In 2006 she was working on a book on the importance of radical psychoanalytic thought to current social and political issues. Today we lost a great American intellectual, a personal hero, friend and warrior goddess, first battalion.