In the pre-Beatles era, D.T.K. L.A.M.F. was a menacing gang tag painted on schoolyard walls, subways and soda machines from Rockaway Beach to Astoria, to stake out turf. By naming the Heartbreaker's first album L.A.M.F., former gang member Jerry Nolan and Johnny Thunders gave props to the Queens streetlife that spawned their punk aesthetics. But that was another century. One of the challenges aging hipsters face is how to avoid embarrassing ourselves with age-inappropriate styling. Had they survived, Thunders & Nolan might have gone the way of Quentin Crisp or even Sinatra. Me & Nick, my longtime junko partner, spend lots of time thinking about this. How do you grow old with a rock & roll heart?

After I divorced Jack Daniel's, and blew off Jim Beam and Johnny Walker it got a lot harder to stay up past midnight. And bunions in in spike heels? Crazy Color and a mini-skirt on the threshold of menopause? After twenty-five years of Sluglife, CorpseGrinder Nick can't stand live music unless it's k.d lang, Morrissey, or Elvis C. So what's left? Kooks of the theater, we joined MOMA. High art is for old farts. Well kids, we're there. But Nick insists we're still D.T.K. L.A.M.F ---- Dressed To Kill, Literature, Art, Music and Film. Sluglife is Artlife. 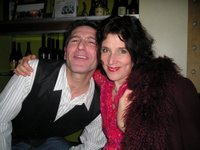