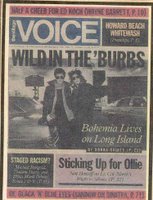 The Village Voice recently celebrated it's 50th anniversary with over 200 pages of greatest hits covers and stories, celebrating a legacy of activism, attitude, and influence. But it's bittersweet; like NYC's most precious downtown institutions---the Ramones, the twin towers, CBGB's, the Village Voice too, is fading into cultural history, making ways for new bands, new buildings, new clubs and new media.

When does love die? Long before you'll admit it. Was it the day the first-person narrative was outlawed, or when you saw a beloved editor get canned? Or when you realized the copy you were so proud of was really just fancy filler between ads? Or was it when they made it a free paper, something folks grabbed to pick up dog shit?

When I started writing for the Voice in 1987, I was still in school. My dissertation Chair, sociologist Lewis Coser, himself a former journalist, lamented the paper had seen it's glory days. I winced---for me, the Voice was still viable, important, compelling. Growing up, the "commie rag" was outlawed by my paramilitary dad. "It's unAmerican," he'd rant. Like my editors, I came across the bridges and tunnels, a refugee seeking meaning, freedom and funtime. The Voice told me where to find it, what it looked like and why I loved it. It was the instruction manual for the life I was called to.

The Voice was considered a "writer's paper." That meant you got quality time, editors nurtured your innate talent, didn't bend originality into canned prose. The place remained young and snotty well into menopause. The paper respected a writer's voice, helped you to hear it yourself, then gave you endless space to let it rip. The paper wouldn't change a single word without asking you first. You got to work with editors who were passionate, activists, scenemakers, hipsters, dreamers, people like Willis, Goldstein, Christgau, Kennedy, Simmons, Press, Eddy and Powers. I've never taken a writing course or even an English class. I learned everything from them.

Around 1997, during the Stern regime, I was hired as a consultant by management to set up the short-lived Long Island Voice--- to give suburban bohemia the Voice it needed. One day, up on the Executive floor, I heard a suit refer to the paper as a "Media Property." I realized then that no matter how much the paper meant to me, how crucial it had been in forming me, in the end it was just another jazzed up commodity form, a product, like Nike or Starbucks.

In the November 11th issue of New York, on the heels of the New Times merger, I love the way former Voice writer Mark Jacobson describes the paper's legacy, "This was the realm of the non-J-school, self-invented, pop-cultural, autodidactic, a place where the high tone met the vulgar and an Everyman could hawk his expertise." Every woman too.