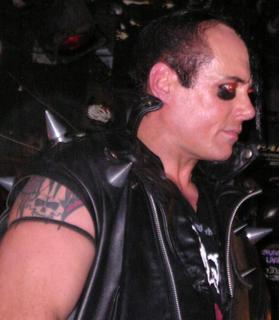 Village Voice--Sound of the City
by Dr. Donna Gaines

"Hilly called in the monsters from hell to save the day. We'll kill anyone who stands in the way." August 12, onstage, Misfits frontman Jerry Only rants, "We're here to save CBGB 'cause CBGB saved me. Hilly believed anyone who walked through the door was allowed to play—it didn't matter who you knew. That's America!"

The club's atmosphere reeks of defiance and repression, with long lines, limited space, and stressed-out bouncers, wary that any perceived code violation could close CBGB down. Fans line up daily by 11 a.m., paying up to $35 for cherished memories and fresh possibilities—Bush Tetras, Blackout Pact, Circle Jerks. Through September, from the Philippines, Las Vegas, Mexico, and Germany, a militia will assemble, three generations strong: 13-year-old Jack just wants to see the place before it's over. For L.E.S. Stitches singer Mick Brown, now about 30, witnessing the Dead Boys live is a miracle: "I've only ever seen them in videos. I was too young." For George Tabb of Furious George, it's legitimacy: "This is our prom, the one the misfits never had."

Critics argue that in recent years, CBGB's bookings have been mediocre. But, argues owner Hilly Kristal, "Bands were mediocre in the 1970's too, so you just let them play. You see what happens." August 27, Stiv Bators's leather jacket hangs ominously over an empty mic stand, as ghosts and sound system snafus haunt the Dead Boys' set. Johnny Blitz kicks over his drum stool, grabs the mic, spewing, "Get me some fucking monitors or I'll punch the shit out of you!" Reunited after 11 years, bassy droners Flipper start and stop, pop guitar strings, fight among themselves. Crude, rude, cranky, dysfunctional. Raw, like the Ramones in 1974. A bright-eyed kid sneers, "Man, how unprofessional!" Yeah. That's exactly the point.

After 31 years on the Bowery, CBGB lost its lease at midnight, August 31. That same day, Bowery Residents' Committee executive director Muzzy Rosenblatt, who plays the role of CBGB's landlord, issued a statement refusing to renew the lease. The BRC is a $25 million-a-year nonprofit, funded by public monies to provide homeless services. Even if the lease is renewed, the $19,000 rent could at least double. Mayor Bloomberg, the BRC's greatest contributor, has offered to mediate, saying "CBGB is part of our culture. They bring a lot of business here." Over 30,000 people have signed a petition urging him to save CBGB, as has a robust chunk of the City Council membership—in an election year. Little Steven Van Zandt responded Sopranos-style: "We're not going without a fight." And he organized a rally to prove it.

On the last day of the lease, the true sounds of liberty rang out from Washington Square Park, as Blondie, Bouncing Souls, Gavin Rossdale, and the Charms performed under the arch inscribed with our first president's words, The event is in God's hands. Little Steven and Hilly even lined up a reunited Public Enemy to fight the power. Chuck D. admonished this city not to keep tearing things down—like Penn Station, now slated to be rebuilt. Punctuating each set and speaker was Joey Ramone, on rotation, a spirit in our house.

"It's no more acceptable to lose CBGB than Radio City Music Hall," declared City Councilman Alan Gerson. "Listen to me, Mr. Landlord, I speak on behalf of a united City Council and united city government—we know you receive a lot of public funds," he said. "Negotiate in good faith [or] we will have to rethink the support government has given you." Then he incited a battle cry, and we dispersed into the dusk: "Hey ho, we're not gonna go!"