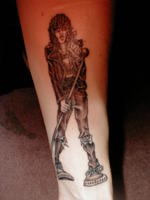 Monday, September 19. Joey Ramone was awarded the Heeb Magazine Lifetime Achievement Award at the inaugural Jewish Music Awards. His mother, Charlotte Lesher, accepted the honor on behalf of punk's Patron Saint. Proud son of Zion Furious George Tabb handed over the award, the magazine's first. In addition to a plaque, a J-Date t-shirt and golden bagel were also involved in the ceremony. An all-girl klezmer band did a festive cover of "(Shana) is a Punk Rocker," and "Ramonia, Ramonia..." a take off on a traditional Yiddish song about Romania.

Joey was the ultimate secular Jew who's bemused sensibility imparted a critical eye, kindness and humor to life's paradoxical absurdities. Although his spiritual orientation transcended organized religion, and he never ate kosher salami, Joey, who's real name was Jeff Hyman, had a strong cultural identity and a huge neshuma--a Jewish soul. He faced the pain of social marginality, and personal alienation with humility, creativity and optimism. Like many Ramones fans, I consider Joey my own personal Bodhisattva, an enlightened soul who chose to return to Earth to guide us towards God's light and love. With all his heart, Joey believed the words he sang---"What a wonderful world."

And God shall wipe away all tears from their eyes;
and there shall be no more death, neither sorrow, nor crying,
neither shall there be any more pain:
for the former things are passed away.
Revelation 21:4

SonnyM said…
The Growing Influence of User Content
A great example of the growing influence of user-generated content: A new study says "Consumers ... Bloggers create an enormous amount of CGM across numerous sources, elevating their overall influence, the study finds.
I'm glad I ran across your blog. It's very good. I like it.

Shania said…
Your blog is great . If I can help, let me know. If you ever need any printing done, I'm sure you'd be interested in Business Cards Try Business Cards
6:43 PM