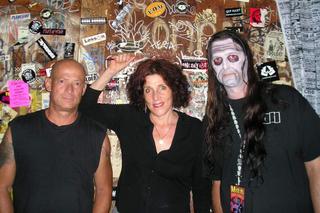 "So like, where's Glenn Danzig?" the hardcore kids of the 1980's returned, mature adults hoping maybe he'd show up for a Misfit's reunion show, a last demon waltz before the CBGB Empire crumbles (we fear). But Jerry was the Only Misfit playing at the benefit show on August 12. With former Black Flag guitarist Dez Cadena and drummer Robo as Misfits, the question of the night was really "Where's Henry Rollins?"

Well, I did see Henry's pretty (gnarly) face etched into a slick twin-fin board at that CBGB gallery surfy artshow July 29 (see 8/4/05 post). But it didn't all coagulate until I hit the stormy waters of Long Island, searching for waves from the lighthouse at Robert Moses to the after-hours breaks of Long Beach. As I slammed and thrashed my way through the ocean pit, I found myself screaming "BLACK FLAG!!!" Diving head first kamikaze into brutal shorebreakers, rips and currents pulling me out towards Portugal. But I did it for you, Henry, and for Glenn, and Jerry Only's lovely daughter, Kathy, who's birthday cake we all shared at the end of the Misfit's show. My ears are bleeding so hard these days the ocean floor is turning red.

After my three days as the battered wife of the ocean, my freind produced tickets for Brian Wilson's SMILE at Jones beach. Not to be confused with Westbury Music Fair's concurrent Beach Boys oldies show, Brian Wilson built a seaside prayer tent of hope, joy and salvation----there he sat, at his keyboards, flanked by two other keyboards, back up singers, two drum kits, a horn section and an orchestra from Sweden. An 18 piece band. Sometimes my palms tingle when I channel Reiki healing energy. Well, they were on fire by the time Reverend Wilson got to Good Vibrations. One of the most crucial composers of the last (and present) century, Wilson delivered God's love and mercy carefully and prayerfully. Everyone knows the Beach Boys didn't really surf---but Brian Wilson is a true soul surfer; he has surely seen both heaven and hell firsthand.

I know that there is no good in them, but for a man to rejoice, and to do good in his life.
Ecclesiates 3:12

My Thoughts... said…
Blogs have been known to comment on a variety of issues, ranging from the latest "Here is what I think" type of blog to the latest big movie release to the newest computer on the market. Your blog is very topic specific and should do very well. Keep up the good work.

Also, you might want to look at two very important, topic-specific blogs for some ideas. MediaNews (www.poynter.org/medianews) and (www.iwantmedia.com). First started in 1999 as independent sites. Romenesko's site is particularly interesting for being a must read for media insiders, often creating a hot debate throughout the journalism community, because of its unique combining of news and rumors.